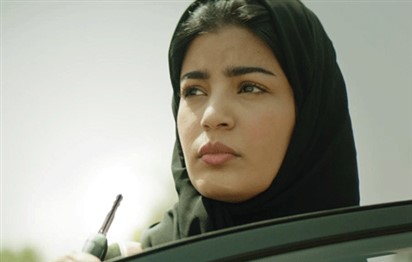 Haifaa Al-Mansour has long led the way for Saudi Arabian cinema. Her 1997 short film “Who?” and the 2005 documentary “Women in the Shadows” helped boost the women’s empowerment movement across the region. In 2012, her film “Wadjda” was the first feature to be shot entirely in the Kingdom, going on to achieve worldwide acclaim and a nomination for Best Foreign Language Film at the BAFTAs. As Saudi Arabia’s film industry has developed since, Al-Mansour has been a guiding light towards the potential that it could achieve.

Al-Mansour’s latest film, “The Perfect Candidate,” is set to make its debut at the Venice Film Festival on the August 29. It has already made history as the first film supported by the Saudi Film Council, which announced its intention to back Saudi Arabian productions and expand the country’s film industry during the 2018 Cannes Film Festival.

Described as a comedic drama about a Saudi female doctor who goes against the traditional patriarchal norms in order to run for municipal election in the Kingdom, the film is something of a homecoming for Al-Mansour, who has worked mainly on international projects post-“Wadjda.” The reason she left, Al-Mansour told Arab News, was that she felt she didn’t yet have the ability to make more films in Saudi Arabia.

“If I (had been) able to make films in Saudi, I might have stayed, but I think I also wanted to grow as a filmmaker — to explore bigger markets, and bigger storytelling. That is why I tried to make an English-language film. As an artist, I grow; I have a bigger audience and reach more people. I love to be a part of that,” Al-Mansour told Arab News.

Last year saw the release of two Al-Mansour projects. First came “Mary Shelley,” starring Elle Fanning in the titular role of a biopic about the female author of the game-changing science-fiction novel “Frankenstein” in the 19th century. Next, Al-Mansour directed “Nappily Ever After,” a Netflix original film about the struggles and biases that African-American women deal with, mirroring the struggles that young Arab women face as well.

Al-Mansour’s movies often focus on the challenges that young women face in male-dominated societies. “The Perfect Candidate” is no different.

“It’s feminist, it’s about empowering woman, and it gives them a chance to believe in themselves and think that they could run for office and get involved in politics in Saudi Arabia. I was nervous at the time, but since then, they have proved (that right). I think the social reform in Saudi Arabia is amazing. When you empower artists, when you give funds to filmmakers, it makes a nation really stand out. I think that (is happening in) Saudi Arabia,” said Al-Mansour. “We’re going to see a different Middle East. I’m so sure of that.”

Though it tackles serious issues. “The Perfect Candidate” is not solely a drama. It also highlights the humor of the Saudi Arabian people — something that often gets overlooked.

“We have a great sense of humor that people don’t see,” Al-Mansour said. “In film, we can show that — it’s something people will discover. Food too. Also, how in Saudi there is a huge distinction between what is public and what is private. In private, people sing, have fun, and are fluid. Once people go out they are reserved, because that is the way the culture is. With film, you will get a chance to see how people are in private. This is the only way that people can see who we are — by opening our heart through film.”

Though it has been less than a decade since “Wadjda,” Saudi Arabia has changed greatly, which had many positive effects on the filming of “The Perfect Candidate.”

“Saudi was difficult to shoot in before,” Al-Mansour told Arab News. “Visas took a long time, the accessibility of places wasn’t easy. People were always reluctant because they didn’t know if filming was allowed or not. Now it’s changed. Now the visa process has been expedited and everything moves a lot faster, which is really wonderful for a filmmaker, because you don’t want to worry about waiting for a visa for six months. Things like this take a lot of burden away from the filmmaker so you can focus on telling the story well.

“Saudi is now a real market. Before, if you wanted to make a Saudi film, the sales would be like a foreign film around the region, but now it’s going to be a real film market, which makes people more interested in financing the film, investing in the film, and being a part of it, because Saudi is a real market on its own,” she continued.

“The Perfect Candidate” stars Mila Alzahrani, Dhay, Nourah Al-Awad, and Khalid Abdulrhim. The casting process was much simpler than for “Wadjda,” to Al-Mansour’s relief.

“When we did ‘Wadjda,’ we wanted to keep a low profile,” she said. “We didn’t want to upset people because we were filming. I was really excited to go and have an open casting call in Saudi Arabia That is wonderful, because there is a lot of talent and we were never able to tap into it. (With ‘Wadjda’), we were staying in a hotel in Riyadh waiting for people to tell other people who knew someone who knew someone through someone. Having an open casting call changes a lot.”

Despite the significance of debuting the film at the legendary Venice Film Festival, where it will be one of only two feature films directed by women, Al-Mansour’s main goal remains to have the film screened in her home country.

While “The Perfect Candidate” focuses on Saudi Arabia, bringing the Kingdom’s culture to the global stage once more, the filmmaker does not want to keep the spotlight only on her. Al-Mansour wants the next generation of Saudi filmmakers to display how truly diverse the country is.

“I think, in five years, we will see a lot more female filmmakers,” she said. “They will be younger than us, and they will have, by our age, produced a lot more, because they’ll have a lot more opportunities. When it comes to art in Saudi, I think there is a huge possibility for younger people to also make money off of their films. It’s hard for us to survive as artists when there is no industry. I think it is different now.

“Art will become something people can actually work on and live off in Saudi Arabia, which was not the case before. Art was not respected. People did not look. People didn’t have that kind of appreciation for it. I think, in five years, we will see a lot more diversity. A lot more men going to places, a lot more women. We have a lot of girls on the Saudi Film Council,” she continued. “You will be seeing a lot more (young Saudi women) making films.”