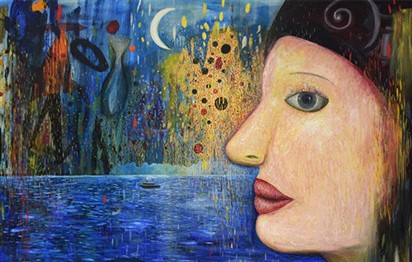 In his first exhibition in the region, British artist Andrew Stahl traces the development of his five-decade practice

“I wanted to go to the Moon,” British artist Andrew Stahl tells us. As a high school pupil, he took up science for his Alevels with space travel in mind. Art was something he studied on the side, but it soon won him over.

“I found it much more interesting than science. And I thought it easier to go to the Moon as an artist.”

That has been the trajectory of his life ever since. He went on to study at the Slade School of Fine Arts in London, where he eventually returned as a professor of fine art. In between, however, Stahl travelled the world, completing residences in places such as Italy, China, Australia, Thailand and Sri Lanka.

Born in 1954, Stahl’s career now stretches 50 years. His work during this time is being explored in a survey exhibition by Sharjah Art Foundation, which runs until Tuesday, September 10. Located in Al Hamriyah Studios, one of the foundation’s off-site venues, Andrew Stahl 1976-Today is a wide-ranging show with more than 90 artworks on viewand is the artist’s first in the region.

“The range of work included in this exhibition is a testament to how Stahl’s travels and time spent living and working in a wide range of contexts has been central to his ongoing interest in transcultural and social interaction,” writes curator and Sharjah Art Foundation president Hoor Al Qasimi in the exhibition catalogue.

It is a show that has been three years in the making, so to speak. Al Qasimi, who also studied at the Slade, visited Stahl’s studio and expressed her interest in bringing his work to the region. Late last year, she selected the works for the exhibition and decided on the venue.

At Al Hamriyah Studios, Stahl’s large-scale works are given plenty of space and the fact they are presented in different rooms gives visitors time to pause between periods. As Al Qasimi notes, “the exhibition unfolds in ‘chapters’ marking different eras of [Stahl’s] work”. These chapters are anchored by a newly commissioned sculpture in the courtyard, which visitors catch a glimpse of every time they weave in and out of the galleries.

In the first section are Stahl’s works from 1976, which are entirely abstract. He arranges patches of colour on the canvas in a seemingly random fashion. It’s clear the artist was still trying to find his signature in this period, which becomes even more salient as you move through the rooms and see his more figurative and conceptually stronger later works.

By 1978, he adds more dimension to these colours, transforming them into forms that are more cubist – masses of overlapping shapes twist into each other, some flat and others with hard lines of shadow that play with perspective. “I realised that my paintings had a sort of thing in charge of them, something kind of dominant in the middle of them,”he tells The National. “Suddenly I thought, actually they’re figures in disguise. They are personalities.”

Gradually, Stahl moved away from the abstract. He traces the start of this shift to one of his sculptural works, Blue Mass(1976), which is made with a cluster of found objects covered in acrylic paint. “This was, in a way, the beginning of figuration for me,” he explains. “I went to an archaeology lecture, and they were talking about how they investigate societies by looking at their rubbish more than anything else.”

He then went around the school’s studios to collect discarded materials – old pots, coffee cups and rags – assembling them into a pyramid before fusing them with a slathering of blue paint. “You’d see this blue mass and then you’d move closer and find things. You find things that have a name,” he says.

His residency in Rome and move towards figuration

This urge to portray something recognisable grew further when he moved to Rome in 1979 after being granted the Abbey Major Rome Scholarship. Eight works from this period are grouped together in one section in the exhibition, where we are introduced to a common motif in Stahl’s work: the fountain.

“I couldn’t believe how fun they were, how amazing and celebratory, and they were everywhere in Rome,” he recalls. “It’s the idea, the looseness of water, which enables me to use paint quite loosely at times.”

There is a general brightness to these works, as Stahl experiments with mimicking the texture and mirrored surfaces of water. These paintings mark an important development in his practice, as he uses techniques that explore the fluidity of painting. His later works reveal this, with sweeping waterfall-like strokes and depictions of sea and sky.

Moving away from the minimalism and conceptualism that defined much of the artistic discourse in art school, Stahl began carving out his own style in the late 1970s. He recalls attending the 39th Venice Biennale in 1980 and feeling invigorated by the presence of vibrant, figurative works by artists such as Anselm Kiefer, Francesco Clemente and Georg Baselitz, whose influences run through Stahl’s work.

Moving across South-East Asia and focusing on the human form

He carried these references into the next phase of his career. After Rome, he received a scholarship in 1991 that allowed him to travel across South-East Asia. What he saw in Cambodia, Vietnam and Thailand cemented his move to figuration, and the human form, or elements of it, became central to his work.

“I became aware of the military trauma that was there, but also the beauty of it,” he says. “In Vietnam, everywhere you went, there were crashed planes. There was one in the middle of a square in Hanoi, a B-52 just there.”

These symbols of war and weaponry migrate into his paintings from this period, which are rife with jet planes, rockets and helicopters juxtaposed with the Buddhist emblems ubiquitous in these countries, including stupas and Buddha figures.

This chapter is certainly the exhibition’s highlight, the moment in which Stahl’s previous styles come together to form something truly unique. The fountain works from his Rome period clearly play into the delicate curves of the clouds in Kiss (1990) and Wing (1995), as well as the shimmering sea in Silver Pagoda (1992). His 1970s cubist-­inspired period, meanwhile, informs Tonle Sap (1991/1992), in which he shows a minuscule aircraft on a person’s back.

Most significant in these works is how Stahl uses these figures as a way to access and express his own experiences. “The figures are a way of entering the painting,” he explains. “The head is representing me being both looking out and thinking in.”

These mementos and fragments of thought are scattered across the canvas, with the manipulation of scale adding a surrealist dimension to the works. Here, Stahl’s move from the abstract is complete, though he maintains a line of conceptualism through metaphor and memory.

We see less evolution in his sculptures, which are spread out across the galleries, and they differ only in terms of size. Sharjah Art Foundation’s commission Astro Fragility (2019) was made in situ over 15 days, when Stahl was setting up the show.

“I had a lovely shopping trip and found all these toys and things I could use, and also lots of discarded material,” he says.

From afar, many of his sculptures are almost amoeba-like and abstract, but when you explore them more closely you will begin to see they are crafted from everyday objects. Move even closer and you will see the meaning. For instance, in House of Cards (2015), a tower of painted boxes are covered in playing cards, but inside are two greeting cards that read: “To a wonderful mum” and “Missing you is a sadness”. We then see it’s a memorial sculpture for his mother.

Drawing from personal life and memory

In the same section are his more recent paintings, Miyu Contemplating the Night Sky (2018) and Walking Through the City (2018), which are even more personal. The first shows a young girl – Stahl’s daughter – looking out over the sea, the sky alight with vibrant shapes. “We were in Thailand and I saw her sitting there looking at the blue sea,” he says. “I wanted to make a painting of it because I could tell she was ruminating about the future.”

The second one contains multitudes of memory: Stahl’s wife walking in the streets of Kyoto, while fireworks flare in the background. “It connects to the UAE because I went to Sharjah Biennial years ago.” he says. “We came across an amazing fireworks display along the beach with the lights swirling around. I thought it was so beautiful, so I included them in the painting. So that painting has layers and that interests me.”

The show tells the story of how Stahl has built his style over time, layer by layer, stroke by stroke. But ultimately it is the stories and characters in his canvasses – his memories of Rome and Asia, and the loss of his mother – that leave a mark.

Andrew Stahl 1976-Today will be at Al Hamriyah Studios, Sharjah until Tuesday, September 10