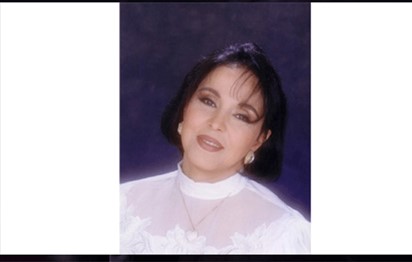 Afaf Rady is happy to meet her fans in Syria, and has expressed interest in making more appearances in national and regional music halls after long years of absence

Legendary Egyptian singer Afaf Rady will return to the stage after years of absence to perform at the Damascus Opera House on 31 August as part of the 61st Damascus International Fair.

“The Syrian Opera invited me to perform this concert so I thought it would be a good opportunity to meet the Syrian people since performing for them before in various concerts,” Afaf Rady told Ahram Online before her trip to war-torn Syria.

The concert will be held amid a full artistic programme that will see a variety of music, films, visual arts and theatre performances during an exhibition organised by Bashar Al-Assad’s government between 28 August and 6 September.

“The Syrians are very good listeners and they appreciate Egyptian arts, so I think it will be a great chance to meet the crowd since I haven’t performed in a while,” she added.

Rady, an experienced artist who belongs to a famous artistic family, inspired a generation with her popular kids’ songs and a huge collection of patriotic and romantic songs, as well as a few theatre musicals and movies. She has proved exceptionally talented in her various endeavors.

Rady has recorded few songs lately, including a song produced as part of a fund-raising campaign and another included in popular TV series ‘Abou El-Arousa’. Rady is now ending her seven-year absence from the stage.

“I didn’t really count the years. I performed many concerts at the Cairo and Alexandria Opera Houses but the concerts didn’t get live TV broadcasts, so I took some time away [from stage performances],” she explained.

Accompanied by Al-Qasid orchestra led by Syrian conductor Kamal Sakaker, the Egyptian singer will sing almost a dozen of her well-known songs, in which she collaborated with legendary Arab musicians, including; Gharb El-Gezeira and Ya Wabour El-Sa’a 12 (of Lebanese Rahbani Brothers), Lmein Ya Amar, Hawa ya Hawa, Wahdy A’da Fel Beet, Yemken Ala Balo Habibi (Baligh Hamdy), Betesa’l Ya Habib, Howa Al-Tarik (Ammar El-Sherie) and Eb’ed ya Hob (Mounir Mourad).