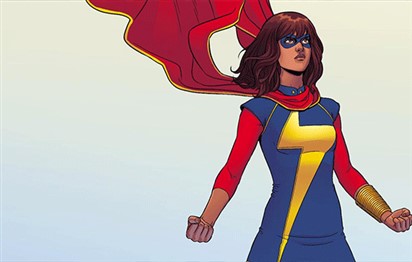 Her on-screen presence has been teased by Marvel bosses for years, but now it looks like Ms Marvel will soon be coming to a screen near you.

The Muslim comic book hero, also known as Pakistani-American teenager Kamala Khan, will front a live-action series on Disney +, it was announced yesterday.

The show will form one of several Marvel projects coming to Disney +, the entertainment giant’s upcoming streaming platform, which will debut on Tuesday, November 12.

Khan is the first Muslim superhero in Marvel’s cinematic and graphic novel roster, and holds the ability to change her size and shape.

It’s not yet been announced when the series will launch, nor who will star in the cast, but it will be helmed by screenwriter and comedian Bisha Ali, Marvel president Kevin Feige revealed at the D23 Expo on Friday.

In the comic books, Khan is a teen who reveres fellow female superhero Captain Marvel, and landed her own series of comics in February 2014.

The Ms Marvel series will join a line-up of Marvel content on Disney +, alongside Moonlight and She-Hulk TV shows.

The platform will also welcome The Falcon and Winter Soldier series, starring MCU actors Anthony Mackie and Sebastian Stan, and Loki, which will take the God of Mischief to “an entirely new part of the MCU” and reveal what he did with the Tesseract he stole in Avengers: Endgame.

See more stars at Disney’s D23 Expo in the gallery below:

t had previously been rumoured that Ms Marvel would front a feature film, after Feige hinted the film company was looking at bringing the Muslim heroine to the big screen last year.

“We’re doing Captain Marvel right now, that’s shooting now. Ms Marvel, the Muslim hero who is inspired by Captain Marvel is definitely sort of in the works. We have plans for that once we’ve introduced Captain Marvel to the world,” Feige told the BBC.

Khan is the creation of writer and editor Sana Amanat, who was was inspired to come up with the character after observing a lack of diversity in her New Jersey home town while growing up.